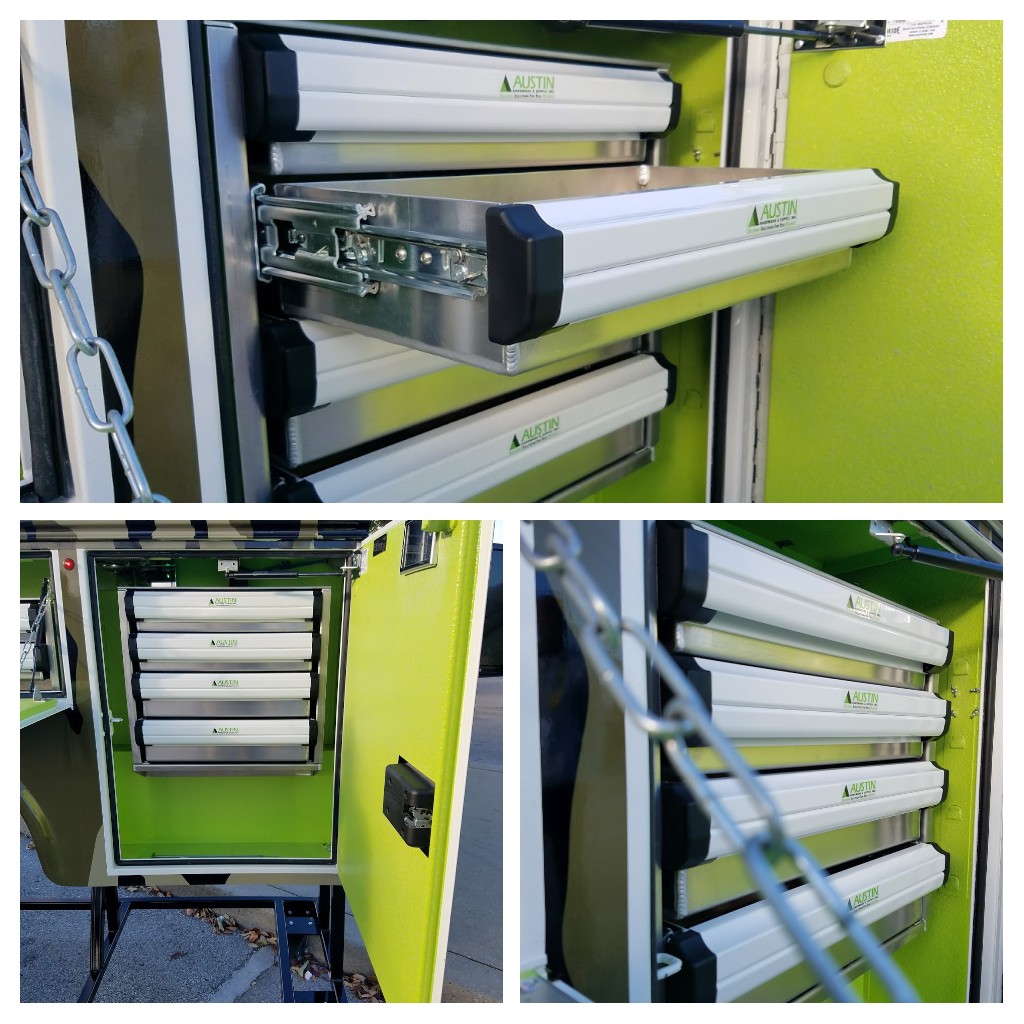 Heavy duty industrial drawer systems almost always incorporate a means to latch the drawers shut - especially in a moving vehicle where turns can cause unlatched drawers to slide open. Creating this latching feature has been problematic for years.

To improve this issue, Austin Hardware introduced our 7650 series "LILO" (Lock-In, Lock Out) heavy duty drawer slides. These innovative drawer slides have a built-in latching mechanism that locks the slide in both the fully closed and the fully open positions. A yellow Trigger on the front of the slide can be depressed to unlock the slide from either position.

These new slides have been a good improvement; however, some mounting arrangements can sometimes be a bit less user-friendly to use and operate. For instance: The trigger can be hard to reach if mounted near the edge inside a compartment.  The trigger is pressed downward with a finger or thumb, so pulling the drawer outward requires the other hand to grab the drawer or a separately attached handle.

A wide drawer requires a lock-in, lock-out slide on both sides of the drawer. Often a user cannot even reach both triggers simultaneously to unlock and open the drawer.

The FDR system is a new patented solution that works in conjunction with the Austin Hardware lock-in, lock-out 7650 series drawer slides.  Key features include: Intuitive to Use
The design, location, and function make operation easy.

Leverage
The operation of the FDR increases the leverage applied to the triggers to make unlatching easy. Potential binding of the latch triggers is minimized.

Flexible
Works with LILO slides on both sides (for wide drawers) or with a single lock­in/lockout slide on only one side only (and a standard slide on the other side).

- How to Order the Part You Need

It is easy to order the FDR part you need. Simply determine the nominal overall width of the drawer (from the left outside face to the right outside face).  The FDR part number is based on this dimension.

The FDR part number is structured as follows:

- How the FDR Works

- How to Install the Unit:

Step 1: Mount Drawer Slides.  The centerline of the 7650 slides must be mounted 1.50” above the bottom of the drawer. This ensures that the trigger is properly located when the FDR is mounted.

Step 2: Identify the Fastening Areas: The thick ribs on the back surface of the extrusion are where the fasteners will be located. The lower rib is 1.25” above the bottom of the drawer and the upper rib is .95” above the lower rib.

Step 3: Prepare the Drawer: Pre-punching holes (or horizontal slots) in the front wall of the drawer is not required, but doing so will make installation easier and faster. Typically, drawers 30” wide or less only need four (4) fasteners. Wider drawers may require more fasteners in the middle (determined at the discretion of the installer).

Step 4: Choose the Fastener: Austin Hardware supplies a wide variety of fasteners that will work to secure the FDR to your drawer:

TEK Screws: A #8 or #10 x 5/8 self-drilling screws eliminate the need to pre-drill holes in the FDR ribs prior to mounting.

Pop Rivets: A 3/16” aluminum rivet is ideal in pre-drilled holes.

Machine Screws: #10 or 1/4” screws can be used if the drawer has clearance holes and the FDR ribs holes are drilled and tapped. 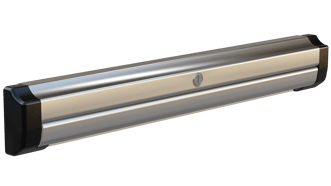 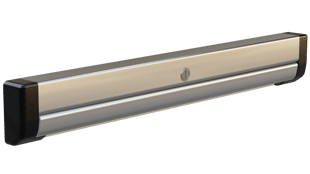 FDR Hooks: Used for "Lock-In Only" applications, the hooks allow the FDR to slam closed and then hold the FDR closed. This arrangement can allow the use of standard non­locking drawer slides. Note: this requires a different FDR length calculation than the standard shown above.

Feel free to contact our Sales Team for technical assistance or help with any application development needs. 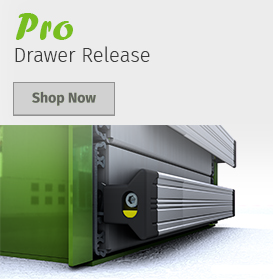 Additional Features and Benefits of the Drawer Release Pro:

Simple and sleek, this drawer release is more than functional - it’s intentional. The Drawer Release Pro installs directly to Austin’s 7650 drawer slides using 2 stainless steel 1/4-20 hex head cap screws and a self-locating nut. The Genesis­™ Drawer Release system does not require a pro to properly install. Paired with our 7650 drawer slides, this install is quick and easy. Designed to give the user a convenient one-handed operation similar to our Front Drawer Release (FDR) system. One kit and you’re all set. This is the cost-effective functional drawer release option you’ve been looking for. 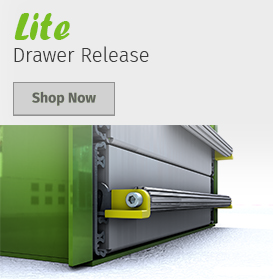 Additional Features and Benefits of the Drawer Release Lite:

Simple and sleek, this drawer release is more than functional - it’s intentional. The Drawer Release Lite installs directly to Austin’s 7650 drawer slides using 2 stainless steel 1/4-20 hex head cap screws and nylon lock nuts. The Genesis­™ Drawer Release system does not require a pro to properly install. Paired with our 7650 drawer slides, this install is quick and easy. Designed to give the user a convenient two-handed operation. One kit and you’re all set. This is the cost-effective functional drawer release option you’ve been looking for.

Looking for innovative solutions?  You've come to the right place!

Fill out our form and an Austin Hardware® solutions consultant will contact you!

"Since my company entered into a vendor managed inventory program with Austin, our service levels and in-stock position on our parts have never been better.  We consolidated 23 suppliers down to one, Austin.

Now we only have one invoice to review, one shipment to check in and we are in stock 99% of the time!  Austin has one of the best customer service teams we work with, I would recommend this program to anyone who needs to take control of their inventory and be sure to have the parts you need on the shelves!"

"I wanted to send along some great news. We have experienced a few problems with shipping over the years, but the solutions that you put in place over the last few weeks have been very positive. On another note, Tom and Emma, the Vendor Managed Inventory team that I have been working with, have done a great job responding to concerns and questions in a timely fashion. That fact is another reason our VMI program is successful and getting stronger every day. Our overall numbers continue to increase and we are looking forward to the growth in 2017."